I don’t think I’ve ever come across a high school student as involved as Piedra Vista’s Katie Broten. You could run out of ink writing down all of her activities!  For starters, she ran cross country for four years (was the team captain for two of them), competed in English Expo, took part in National History Day (“I really love National History Day because it involves two things I really love which is writing and history”), she participated in the school’s Girl Power Club, competed in Quiz Bowl (“I love Quiz Bowl, it’s like trivia!”), and, oh yeah, she was the student body president this past year.

Her competitive nature is what drives her to stay so involved. “I’m a very competitive person and I’ve been in it (National History Day) for three years,” Katie said.  “The first time I got third place and the second time I got second and this year I finally won, so I guess I achieved my goal.”

She hopes to attend Georgetown University and study government and eventually go to law school. Her dream would be to work on campaigns or in the White House as a political operative.  “I love Washington, DC, I’ve loved it forever!,” she said.

Katie is the type of person willing to try new things and challenge herself, that’s why she first started cross country.  “I had never done it before freshman year and I was encouraged to do it by a girl who was on the team,” Katie recalled.  “I just joined and didn’t know anybody, but I did it and ended up liking it and really enjoyed how your hard work made tangible results.  I made some really good friendships that in no way I would have if I hadn’t run cross country.”

A pattern of getting involved in things she’s not familiar with has led her to become a success.

“So, in cross country, you just have to put one foot in front of the other, but you have to start,” Katie explained.  “Cross country inspired me to do other things because I would take a step and do something I wasn’t going to do like Quiz Bowl or National History Day or English Expo and stuff I wasn’t super involved in.  Cross country encouraged me to do things that I wouldn’t normally.”

As you can expect, Katie didn’t have a lot of free time her senior year.

Oh, we forgot to mention she’s one of New Mexico’s Student Senate youth delegates.  Katie also served on the New Mexico Public Education Department Student Leadership Network.  When not doing that, Katie volunteers at the local hospital and volunteers for the local democratic party.  But wait, there’s more.  Katie is a representative for Better Angels Debate Society. “I recently spoke at the Reagan Presidential Library about this specific form of debate that encourages civil discourse rather than argument and it’s been really a fun thing for me to learn.”

“I think the first thing that got me into it is I love arguing with people.  Ever since I was little my mom was like, ‘Oh she’s going to be a lawyer. She just wants to argue with everybody all the time.’  But I’m also passionate about public service and people using their positions to help others.”

Katie likes to speak on issues such as involving her peers in the political process.  She will go to such lengths as offering to take peers out for ice cream if they were eligible to vote.

“I kept voter registration cards in my car and if someone said ‘I’m 18 and haven’t registered to vote,’ I’d run out to my car and give them a card.  Political action is important to me and it’s my generation’s job to step up to the plate now and do what’s best for the country and the world.”

Katie’s advice to incoming high school students is to get involved.

“Coming out of middle school, you’re really insecure and you just want to be like everybody else and that’s not a satisfying high school experience.  I know people who have followed that path and they didn’t get as much out of high school as I did, branching out and trying new things and meeting new people and really making best friends outside of your circle.  It really enriches you as a person and it really built my confidence because I could say ‘Maybe I’m not great at this, but it was fun.  I didn’t completely fail, I learned things from it.”

With all of her success in various aspects of her life, when was the last time she failed at something?

“I recently got my first college rejection letter.  It came the day after I got into Georgetown, which is my first choice.  I was like, ‘if I didn’t get in, I’m not supposed to get in’. I know that I’ve worked this hard. I know that I’ve put in this much effort and wherever I end up is just a reflection of the work that I’ve done.”

What was the school that rejected her?  Boston College. 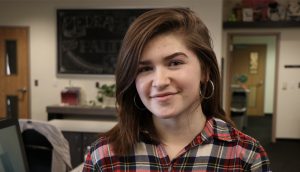