Every now and then, what looks like an average baseball workout can reveal a player that’s very unique.

“I have cerebral palsy which happens when you have a stroke in your head,” Brian explained.

Specifically, it’s caused by damage to the part of the brain that controls movement.  Brian Kice of Santa Fe Prep has lived with the disorder his whole life.

“If there was a sport you could choose as a kid to play with cerebral palsy, it would not be baseball,” he said.

The condition makes it difficult to do simple things like running or even catching a ball.  “I can’t necessarily turn it over,” he said about the use of his glove.  “I have to push it and support it with my left hand.”

Brian has limited dexterity. “I’m paralyzed from the joint of my ankle down.”

“He can’t run as well as he would want to, he can’t catch as well as he could, but on the mound he’s as solid as any other pitcher in the district.”

“He’s one of those guys you can rely on,” said his coach.  “He’s here early, he’s always here late, and he’s just a student of the game.” 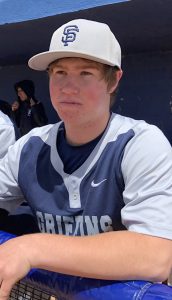 Not only does he overcome multiple physical limitations, but he’s also had to deal with the teasing that comes from being different.

“There’s been a lot of things said about me,” he said.  “As a young kid, it’s a given that you’re gonna take that as kids being mean or people criticizing you, but now I take it as motivation because I’m always trying to push myself to get better.”

There’s no cure for his condition, but some affected kids can achieve near normal adult lives with appropriate treatment and Brian doesn’t plan to let his disorder stop him from reaching his goal.

“My dream is to play professional baseball, so whatever I can do to get to that next level I’m willing to do it.  Whatever people say, I’m not going to take that to heart.”

Heart is something Brian will never be questioned about.