If there’s a player who knows something about strikeouts, it’s Bernalillo’s Damian Gutierrez.

“I have power in there if I need to, but I can spot up if I have to,” described Gutierrez of his pitching style.  “I have a nice off-speed pitch.”

“He knows what to do with the ball, he can power the strike zone, dominate them with a fastball” said head coach Brandon Corcoran.  “Then if I need him to slow down and spot up he’ll absolutely do that, no problems.”

The senior currently leads the state with 76 Ks on the season so far.

He had 106 strikeouts last season and hopes to better that mark this year.

The Spartans made it all the way to the state final last year, but came up short in the title game at Isotopes Park.

“It’s just cool because you can go back there and be like ‘yeah, I’ve played where the pros have played’,” he said.  “It’s just a good experience.”

It’s an experience he hopes to have one more time this May. 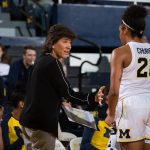 FUDDRUCKERS PRESENTS: EVERYBODY HAS A STORY, YVONNE SANCHEZ “The Never Ending Journey or Failing Miserably at Retirement”General News, Press Releases