Three teams claimed victory on Saturday at the first ever Esports Championships in New Mexico.  Los Alamos beat Kirtland Central in the game SMITE by a 2-games to nothing score.  Rio Rancho came from behind to beat Cleveland in a 7th game OT match of Rocket League.  Rio Rancho’s League of Legends team also won the championship in their bracket after beating Sandia Prep 2-1 in the final.

Here’s a look at some of the Championship action

The final results for each playoff bracket can be accessed at https://www.nmact.org/activities/esports/.

In addition to the individual game title championships, the top four Esports schools have been identified based on overall performance from the 2019 season.  These four schools will receive NMAA State Esports Trophies.

The top four Esports schools for 2019 are: 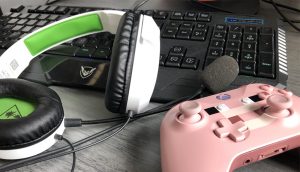