Sportsmanship can come in many forms.  In the case of Luke Hammett, it’s lifting an opponent up off the ground in football. It’s speaking respectfully to an official.  It’s complimenting the other team for a job well done.

“I tried to go out of my way after every game and talk to a couple of the other players and tell them they did a good job,” Luke said.  “I like to hear that, so I would like to tell other people that too.”

Luke is not your typical student-athlete.  Luke attends Foothill High School in Albuquerque.  The educational facility is part of the Camino Nuevo Youth Center. These teens go through a school day and have the opportunity to compete in other activities and sports just like most kids.

“There’s a lot at risk for him and he doesn’t want to lose that opportunity,” explained Foothill athletic director Curtis Miller.  “He knows that attitude affects everything and through his positive attitude he makes it a successful program.”

Competing is second nature to Luke.  “I have four brothers and we all grew up playing sports,” he said.  “My dad coached all my games.”

Playing football and basketball have helped mold him into a better person.

“Without sports, I don’t know where I would be,” Luke said.  “I devoted all my time to sports. I devote my time to stay away from the negativity and focus everything on football and basketball.”

“He’s become a leader for both the football and basketball team,” said Miller.  “He may not be the best athlete out there, but he gives everything he’s got and he does it with a joyous heart.  He wants others to succeed as well.” 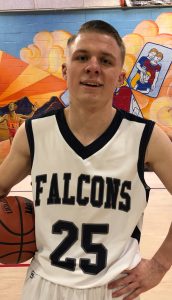 Actions speak louder than words and Luke is an example of good sportsmanship and respect for his opponent.

“He’s a lot more positive, not just on the field but in the classroom towards his teachers and towards his coaches and towards the refs,” said Miller.  “He’s a very polite individual.  He’s always looking to improve and also to improve his teammates.”

“The person I was before was stubborn, hard-headed, I didn’t listen to nobody,” Luke explained.  “I argued and I had no motivation, now I can take criticism.  Sports has taught me the discipline to be able to take that criticism and turn it into something better.  I know that other coaches and my teammates are there to help me.  I want to better myself, so I listen.”