PECOS PANTHERS IN THE HUNT FOR THIRD STRAIGHT

“Walking up the ramp with the blue trophy, twice, is the best dream anyone in New Mexico playing basketball can have,” described Pecos senior Omar Dominguez.

“I don’t because it’s too hard,” explained Harge.  “It’s too hard to do.  Would we like it?  Absolutely. But it’s very difficult to do, so it’s one quarter at time.”

“It’s a new bunch because a lot of them don’t have that state championship experience,” explained Harge

Anthony Armjio and Xavier Padilla are the only returning players who saw significant playing time last season.  So, this year’s bunch is making a name for themselves.

“We just came into the year prepared for everything,” said Armijio.  “We lost seven seniors last year but we knew, coming in this year, we had a chance to make it to the big game.”

“This is the first year I have a post,” said Harge.  “My post last year was Xavier Padilla and he’s 6’1” with his shoes on and two pairs of socks.”

Even with some inside presence, the Panthers still play an up-tempo, pressing style of basketball.

“We’re trying to wear teams out if we can and those that try to run with us do well and those that don’t, don’t do so well, but that’s our style of basketball and my philosophy and it makes for a fun game.”

Pecos earned the top seed in their bracket.  Being number one puts a big target on your back

“That’s what everybody strives for because they think you’re playing lesser teams, but that’s not necessarily true.  Everybody’s record when you get to the state championship tournament is 0-0.  We’re just hoping that we can go in there and play hard and have the kind of success we’ve had in the past.”

“It’s always in the back of our heads that we have a big target on our back,” said Dominguez.  “We know that to do it a third time is even tougher but we know we can accomplish it if we keep our heads on the court.”

Pecos will open the tournament against Monte Del Sol on Saturday. 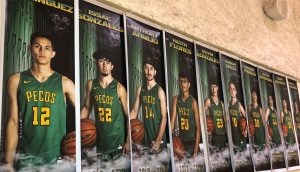