Hot Springs boys basketball is back on the map.  For the first time since 2000, the Tigers claimed a district title.  Second-year head coach Derek Bean is leading the team to the postseason for the first time in a long time.  “We’ve gone dormant and it’s a breath of fresh of air to see your team at the top again,” said Bean.  “I’ve got a special group that has bought into what we’ve been preaching. It’s been a heck of a ride.”

He can appreciate the journey back to the top.  Bean is a 2005 graduate of Hot Springs High School and he never had the opportunity to play in the postseason.  In fact, the last time Hot Springs won 20-plus games was back in 1994 behind Royce Olney.  The Tigers ended the season 24-4 and finished state runner up.

This year’s Hot Springs squad is a group of young guards combined with a handful of older boys who were looking to be led.  “I’ve got big 6’5” post Tino Luna,” said Bean.  “He’s a load, he’s really stepped up as a senior and used his 6-5 frame.” Bean’s sleigh of guards includes sophomores Nathan Salcido and Verrels Lukman who gained a lot of experience playing summer ball.

After losing their season opener, the Tigers then went on to win the next six.  After suffering their second loss (a 2-point setback to Wingate), they put together another six-win rally.  “I think early in the season, we had some issues with the team not knowing how to handle success,” explained Bean.  “We got punched in the mouth a time or two.  It’s been like blow the balloon up, pop it, blow the balloon up, pop it.”

Right now the balloon is filling up again.  Defensively they are holding team’s below their average.  In their first 25 games, the Tigers had only given up 999 points (that’s less than 40 points per game).  It’s no secret what the goal is for Hot Springs.  “We want to play on March 16th(the date of the state final),” Bean wasn’t shy about stating.  “As any competitor, you want to be there at the Pit.

“It’s something I’ve always wanted to do, lead my team down the ramp.”

As for the competition, “Sounds like all roads are going to travel through St. Michael’s or Sandia Prep,” said Bean.  “They are good looking teams, but we’re excited to be mentioned in the picture again.”

Bean hopes it’s a picture that includes a blue trophy and a championship banner.  Hot Springs (23-4) earned a #3 seed and will host Tularosa in the opening round on Saturday. 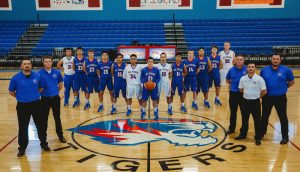