The Kirtland Central girls basketball team has more state championships than any other program in the state.  The Broncos have 19 title banners since 1980, but they haven’t won it all since 2012. Devon Manning is hoping to change that.

Manning took over the program this year after stops at Piedra Vista and Bloomfield High Schools. This is his first girls head coaching job.  “It’s been enjoyable,” Manning said.  “Coaching basketball is the same for me whether it’s boys or girls.  Not a whole lot of complaints on my part.”

There’s no reason to complain when your team is on top of the polls right now.  The Broncos have one of the deepest squads in the state. “The biggest strength of our team is our depth,” Manning described.  “We can go ten strong.  We’re trying to get up and down the floor for 32 minutes and try to get good shots offensively when we get the opportunity.”

Manning knows a little something about getting good shots.  He is 9thon the list of New Mexico’s all-time leading scorers with 2,217 points in his career.  He is also in the record book with 793 career field goals.  Manning was also money from the free throw line, making 204 shots from the charity stripe in 2003 (good for 6thbest in state history). He graduated from Kirtland Central in 2004 and says it was hard to pass up an opportunity to return to his alma mater. “Hopefully my success as a player translates as a coach,” he said.  “We just recently had a team meeting and I went back to my days to talk about all the good that came out of the three state championships, but what the players don’t realize are the hardships that we went through, the losses, the arguments.  Everything is not sunshine and rainbows.  We have what it takes (to win), but we may get down at times and have to pull ourselves up.”

The Broncos haven’t been down too many times this year.  They only have three losses this season and only four teams have scored more than 50 points on them.  Their average margin of victory is 25 points.

“They had a really good quad coming back and Kirtland Central girls basketball is one of the more historic programs in the state,” he said.  “I knew what the pressure was going to be when I took this job.”

“You have to realize every team wants to be the team that knocks off number one.  They (his players) already have a target because they play for Kirtland Central.  We preach you’re going to get everyone’s best, not because of who you are but who you play for.”

Manning embraced the term for his squad this season.  “We talk about what’s doing best for the team and your teammates, sacrificing for the team and not worrying about individual stats,” he said.  “If you embrace the team life, you are already putting yourself in a good position.”

Right now, their position is on top of the polls. 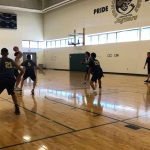