WHITE IS WEEK TO WEEK & HIGHLAND SENIOR HAS A BLOCK PARTY

Here are some notes and newsworthy mentions for this week in high school athletics.

Aztec High School is hosting an all-girls wrestling meet on Friday.  It’s the first of it’s kind in the state of New Mexico.  They will have 9 weight classes, one team award and one outstanding wrestler.  The competition starts at 3pm, the day before Aztec’s 37thannual Tiger Duals.

Last week, the La Cueva girls won the Swimming Albuquerque Metro Championships.  This Saturday, it’s time for the boys to get into the pool.  The Eldorado boys won this meet last year.  The swimming events start at 10:45 am at the West Mesa Aquatic Center.  Fans will get an opportunity to watch three future Division One swimmers in the water. La Cueva’s Jack Hoagland (Notre Dame), Cibola’s Keelan Hart (Purdue) and Sandia’s Max Hawton (Kentucky) are all scheduled to race.

White Out, But For How Long?

Good news for Santa Fe’s JB White.  An MRI revealed he did not suffer any tears or structural damage to his knee following his injury against Clovis earlier this month.  Demons head coach Zack Cole says the timeline for White is still week to week. Cole does not know if White will return this basketball season or not.  White is expected to have his knee examined again in three weeks.  The Demons are 13-3 and host Albuquerque High tonight.

Highland’s Brooklyn Crawford recorded 12 blocks in a 55-32 win over Hope Christin on Tuesday.  The total ties her for third on the state record list for most rejections in a single game.  The record is 14 by Dora’s Kelli Merrick and Sandia Prep’s Samantha Jeffries.

Piedra Vista head coach Joe Reed picked up his 100thwin this week with a 69-42 win over Eldorado. The Panthers are 17-2 on the season and have their toughest matchup of the year on Saturday when they host unbeaten #1 West Mesa.

Silver High School’s Brandon Siqueros won his 200thgame as a head boys basketball coach after beating Cobre, 71-44, on Tuesday night.  Silver is 14-3 and the Fighting Colts will host Centennial on Friday.

Mayfield head coach George Maya picked up his 484thwin of his career with a 58-14 victory over Gadsden.  He is 16 shy of reaching the 500 win plateau.  Maya has 8 finals appearances, including three state titles.  Mayfield is 13-5 on the year.  They host Deming on Friday. 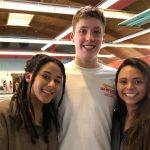