The New Mexico Sports Hall of Fame announced six new inductees into the Class of 2018.  The list of standouts includes some New Mexico High School legends.  Former Clovis High School basketball player Bubba Jennings is one of the new inductees.  Jennings is considered one of the best New Mexico high school basketball players of all time.  He scored 75 points in a game against Goddard High School (and that was before the three-point line).  Also in this year’s class are longtime basketball coaches Jim Murphy and Mike Brown.  Murphy has coached at Hope Christian for over 30 years and won 14 state titles. Brown led Albuquerque Academy to six straight state 3A basketball championships (1989-1994) and 14 district championships. Their “six-peat” from 1989-1994 is not only a state record, but it also ranks eighth nationally.

According to the biography descriptions on the NMSHOF website, here is a little more background information on the inductees.

Jennings was the New Mexico Player of the Year in 1980. He was named by the NHSCAA to their All-American and Academic All-American teams. He led the Wildcats to the 4A state championship in his junior year (1978-1979) and was on the First All-State team in his last 2 years.

Murphy’s teams have won 7 of the last 8 3A or 4A state titles. Murphy has coached one undefeated team (the 29-0 Class 2A state champions in 2001-02) and has just two losing seasons. His teams have won 24 District titles.

Craig started the UNM softball program and racked up 676 wins.  In 17 of her 24 years with the program, her teams were nationally ranked.

The six individuals will formally be inducted at the NMSHOF’s 46th annual banquet, set for Sunday, April 7, 2019, at 5 p.m. at the Albuquerque Convention Center. 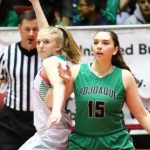