Girls’ wrestling is still relatively new to the state of New Mexico, but it didn’t take long for the sport to become popular at one school.  Highland High School currently has 20 girls in their wrestling program this year.

“It caught us off guard,” said second-year Highland coach Robert Velasquez.  “We had to adjust our wrestle schedule to accommodate the extra girls.”

Last year at the state meet, there was a girls’ exhibition tournament for the very first time.  The exposure of those matches helped introduce the sport to others and gave more girls an opportunity to compete.  “We had two girls last year that wrestled for us and both competed at the state exhibition and both were successful,” explained Velasquez. “So, when we announced the results at state, that started a lot of the talk.  There are girls here who are tough and want to be known for that. They are trying hard to break a stereotype of girl athletes only being able to do certain sports like basketball or softball.  They want to challenge the boys.”

Velasquez says there isn’t a big difference between coaching boys and girls.  “The preparation is the same with boys and girls,” he said. “There’s an obvious difference when it comes to strength, but the mental preparation helps them overcome some nerves of being on the mat.  On my end, it’s a lot of talking and giving them mental pictures. ‘See yourself doing it, and it will happen’ is the advice I give them.”

There are a variety of reasons the program has seen a rise in the number of girls who joined the team. Some take up the sport to build self-confidence.

“I got picked on a lot because I was really small and I was a girl and I felt uncomfortable and wanted to feel more confident in myself,” said Bianca Loving.  The junior is in her second year of wrestling.  “It helped me stand up for myself.”

Sophomore Mia Contreras has been wrestling for three years.  “I grew up in the wrestling room,” said Contreras.  “My older brother and cousin were junior wrestlers and my dad was an assistant.  I would drill with them but not wrestle until I was in the eighth grade.”

“I love the challenge and the way you can push yourself in what you can do.”

When Contreras and Loving first got involved in the sport there weren’t as many girls.  They had to wrestle against the boys at practice.  Despite some strength differences, it taught the girls a tenacious and persistent attitude.  “We’ve been told not to let their strength and size work against you,” said Loving.  “It taught me to never give up.”

Loving hopes that having so many girls in the program will serve as an inspiration for others.  “It teaches kids you can do what you want to do and get out of your comfort zone and get somewhere in life,” she said.

Contreras agreed with her teammate.  “I talked to some girls and told them it’s super fun and it’s motivating to see how you can grow as a woman. I used to be really quiet, but wrestling helped me grow so many friendships.”

Velasquez says most of the girls compete at the JV meets, but some earn the right to compete at the varsity level.  The APS Invitational takes place this weekend and some of these girls will be competing against the boys.  “Five of the girls won their wrestle-off competitions at practice and earned spots in the tournament,” said Velasquez. 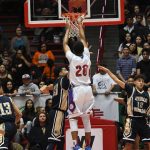