With 2018 in the rear view mirror, here’s a look back at the fall sports champions.

It took a little extra time and effort, but the Cleveland Storm boys soccer team ended the 2018 Fuddruckers State Soccer Championships the same way they started, as the #1 team. Cleveland entered the week with the top seed in the Class 5A bracket.  Under the lights on the final day, the Storm met up with the Mayfield Trojans for the championship.  The two teams battled through a scoreless first half followed by another scoreless second half.

“We had some chances early where we banged one off the post and I thought we were playing really well, but we just couldn’t get them to fall,” said Cleveland head coach Shaun Gill. “We had a couple chances in the second half and they didn’t go in but we just kept pressing and pressing.”

After a ten-minute overtime, the two teams needed a few more minutes to decide a winner.  In the second overtime, Cleveland took a corner kick directed at the Mayfield goal.  The ball bounced around and was deflected off a Mayfield player’s arm.  A handball in the box penalty was called. Cleveland senior Jairo Barreras took the penalty kick and the ball got by Mayfield goalie Xavier Calderon, scoring the only goal of the match in the 97thminute.  Cleveland won their first state soccer championship by a 1-0 score.  “We put they under pressure in that second overtime and unfortunately for them they had a handball in the box and we were able to capitalize on a PK,” said Gill. “It was a handball and kudos to the refs for calling it, but it’s unfortunate because Mayfield is a quality team and they deserved to be here.  It’s a shame it ended that way but I’m blessed we got to hoist the blue trophy.”

“It’s the best feeling in the world,” said senior goalie Ryan Watson.  “These guys deserve it.  We worked hard and it feels good to be rewarded for it.”

The Trojans finished the year at 16-6-1 while the Storm capped off their championship season with a 20-3 mark.

Chargers Back On Top Of The Soccer World

After winning back-to-back state titles in 20156-2016, the Chargers came up short in the 2017 final. But at the end of the day in 2018, Albuquerque Academy was lifting the blue trophy once again.  The Albuquerque Academy boys soccer team shut out rival Los Alamos 3-0 in the Class 4A title game of the 2018 Fuddruckers State Soccer Championship.

Academy scored their first goal just 18 minutes into the match when freshman Neven Zapatka took a rebound off the post and punched one in.  About six minutes later, Trevor Dean gave the Chargers a 2-0 lead with a goal of his own.  Academy dominated the first half.  Los Alamos only had one shot on goal in the first 40 minutes.  The Chargers would add one more goal in the second half off the foot of Oliver Kumar to finish off the scoring.

“I don’t think we could have scripted it any better,” said Academy head coach Laney Kolek following the win.  “With a leader like Aaron Hill anchoring that back line and communicating with his entire squad, these guys did it right.  They peaked at the right moment and our younger guys sealed the deal by polishing goals off.”

It was the third title in four years for the Chargers.  Academy finished the season with an 18-4-1 record.

The Sandia Prep boys soccer team beat Robertson 3-0 in the Class A-2A Fuddruckers State Soccer Championship.  The Sundevils lost to the Cardinals earlier in the regular season and this was their chance to even the score when it mattered most.  It was #1 versus #2 for the title and the top ranked Sundevils found the net early.  Sandia Prep scored two goals in the first seven minutes of the match.  Senior midfielder Brian Altavas scored on a breakaway early on.  Two minutes later, senior forward Lucas Sandoval added another similar to his teammate. The Sundevils took a 2-0 lead into the half and then Shamus O’leary scored in the final 40 minutes to give Sandia Prep their 3-0 victory.  It was their first state title since 2013.

Sandia Prep ended the season with a 15-8 record while Robertson wrapped up the year with a 15-6 mark.

Matadors Outlast Rival La Cueva for the 5A Trophy

It was a marathon match to decide a winner in Class 5A at the Fuddruckers State Soccer Championships. Sandia met up with rival La Cueva to battle it out for the blue trophy.  The Bears beat Sandia earlier in the season by a 4-1 score but the stakes were higher for this one.  The Matadors found the net first.  29 minutes in Lindsey Ellison got Sandia on the board with the first goal of the match. Sandia would hold off La Cueva shot after shot until the 72ndminute.  The Bears evened the score thanks to a shot and goal by Hannah Duffy. This one went to overtime.  10 minutes came and went.  This one went to double overtime.  After another 10 minutes, they still didn’t have a winner. The two teams stayed on the pitch for a third overtime.  10 minutes later they still didn’t have a winner, so it went to a fourth overtime. After 40 total scoreless minutes it was time for a shootout.

Sandia sophomore goalie Charlee Wimberly made a save in the first round which proved to be a good start. All four Matadors found the net and when La Cueva’s fourth shooter went high over the net, it was time for Sandia to celebrate.  Sandia won the title on a 4-2 penalty kick advantage.  It’s their first championship since 2008.

“I couldn’t feel anything in my body and there was so much adrenaline,” said Wimberly of the cold and dark conditions during the exciting finish.  “I just tried to keep my head in the game.”

It was quite a ride for Sandia in 2018 as the Matadors named a new head coach just days before the start of the season.  Jay Sheraden took over the program and led them to the finish line.  “It’s an absolute dream season,” said Sheraden. “We did have a rocky start, but these girls came together and we became a team and became a family and we started doing great things together.”

The Matadors finished the season with a 17-4 record and the Bears dropped to 18-3-1 on the year.

When it comes to girls soccer, Albuquerque Academy is hard to top.  At least, they have been for the past several years.  The Chargers claimed the Class 4A blue trophy after beating Hope Christian 4-1 in the final of the Fuddruckers State Soccer Championships. It’s the third straight state title for Academy.

One of the state’s most prolific scorers put the Chargers on the board 26 minutes into the match. Eliza Mariner put the first goal of the night into the net.  After Mariner’s goal, the spotlight turned to her teammate Anna Carpio.  Carpio turned in a hattrick with goals in the 35thminute, the 51stminute and a second half goal at the 63rdminute mark.  Hope Christian’s Kyra Stafford scored late in the match to avoid the shutout, but it wasn’t enough.

“The girls were really composed and really focused,” said Academy coach Peter Glidden.  “Once Eliza scored that first goal, it was just ‘lights on’ and ‘hey, we can finish this’.  They had that killer instinct.”

“It’s a testament to these girls that they didn’t back away from the challenge and it is a challenge going into it as the favorite and having everybody try to take you down. These girls just played their game and stayed at a high standard at practice and that made a huge difference.

Academy capped the season with a 21-2 record while Hope Christian dropped to 18-3-1 on the year with all three of their losses to the Chargers.

“I’m so happy for my team,” said Mariner following her third championship.  “It’s an amazing feeling to be so consistent.  A good friend told me state’s a different monster.  Anything can happen.  The better team doesn’t always win.  Hope put up a fight and I knew once we could get that momentum I knew we could hop on that horse and ride into the sunset.”

3 For Prep and 1 For Their Rookie Head Coach

The Sandia Prep girls soccer team ended the 2018 season, the same way they started it… as state champs. The Sundevils beat St. Michael’s 1-0 in the Class A-3A final game at the Fuddruckers State Soccer Championships. It was one of the smallest players on the pitch who helped lead them to another blue trophy.  The two teams battled it out in a defensive game for the first 50 minutes.  Then 8thgrader Kiran Hill scored on a breakaway.

“My midfielder Alex Forrester played the ball in and I ran onto it and I beat one defender,” Hill described.  “Then I saw the goal wide open and I played it and it went under the goalie’s dive. I put enough power on it.”

That would be the only goal of the day for the Sundevils, but it would hold up.  Sandia Prep’s defense kept St. Michael’s out of the net resulting in a 1-0 final score.  “It was the most physical match we’ve had all year,” said 1styear head coach Matt Westerlund.  “They were by far the fastest team, the strongest team.  They pressed us all season. Every time we’ve played it’s been 1-0. I think it took us being a very organized and calm team and going out there with the mentality we were going to be the team that possessed the midfield and that’s what we did.”

It’s the third straight state title for Sandia Prep, but the first for Hill and their rookie head coach.

“It’s exciting for me because it’s my first year,” said Hill following the win.  “We started to pick up the pace in the second half and that’s what got us the goal.”

Westerlund took over the girls program after years of a role as an assistant with the Sandia Prep boys team. “My first as a head coach and I’m happy I was able to keep their tradition.” 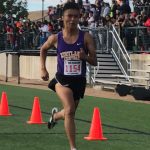 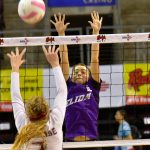