“LET’S FINISH” IS THE MESSAGE FOR THE TAOS TIGERS

Taos has never hosted a championship football game, let alone ever played in one.  They’ll get to do both this weekend against Bloomfield with the 4A state title on the line.

“I think it’s going to change the whole aspect of the town,” explained senior lineman Dominic Lopez.  “It used to be known as a basketball town and now it will be known as a multi-sport championship town.”

Taos spent several weeks at number one, until they were shutout by St. Pius 27-0.

“I think it re-fired us up,” said Lopez.  “I think we got a little complacent at that time thinking we were going to go in there and have an easy win and come out unscathed.  I think it humbled us a lot.”

“It was more of a learning tool than anything else,” said head coach Ed Abreu, Jr.  “It really woke us up.  We are beatable and we are still beatable today.”

But it’s another loss that sits in their mind.  The Tigers fell to Portales in the playoffs last year and didn’t want a repeat performance.

“That loss definitely served as motivation because we didn’t want it to happen to us as seniors and we wanted to make it as far as this game,” said quarterback Justin Good.

“To win a state title would mean a lot, especially for the town,” said Good.  “It shows that anything can be done with a lot of hard work.”

This journey actually started four years ago when Art Abreu took over the program.  He pulled his varsity off the field for having a bad pregame warmup and right then he made a promise to his freshmen.

“That was the goal we set out when I talked to them four years ago, right down this way,” said Abreu. “I promised them, if we stick together and we don’t leave each other’s side, something is great at the end of the rainbow.”

Abreu has one message for his team when they walk onto the field on Saturday.

The last chapter of the season starts Saturday at 1pm at Taos High School. 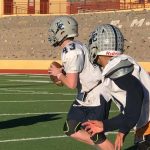