Down in the southwest corner of the state is Santa Teresa High School.  It’s right on the border of Texas.  Their community is buzzing right now about their football team, which is something new for the school.  They’ve gone from worst to first.

The Santa Teresa football team is doing something they’ve never done before.  They won their first six games of the season.

“That’s history, that’s something that’s never been done here,” said wide receiver Zion Brisby.  “We’re excited, the whole team is excited about it. At the same time, we’re staying humble and working hard so we can keep the streak going.”

The players are finding out that winning is fun.

“Now that we’re on top it seems like teachers and students are giving us all the love,” said senior quarterback Izaiah Velazquez.  “It feels good.”

“This is a good team,” said head coach Shae Vierra.  “We’re giving up less than 10 points a game, we’re scoring more than 30 points a game. We’re fast, we get after you.  We play great defense and we can move the ball. This team is really complete.”

The last time Santa Teresa made the postseason was 2010.

“Last year we went 6-4 and these guys felt like they should have been in the playoffs last year and they’ve had a chip on their shoulder ever since last year,” Vierra said.  “They’re a confident group because we return almost everybody from last year except our quarterback.”

Experience and the addition of some baseball players who made the postseason have helped their football product.  They’re also a very competitive bunch.

“Get on the bus, they want to be the first guy on the bus,” explained their head coach.  “They want to be the guy that throws the furthest in practice.  They compete with everything they do.  They’ve won in baseball, they’ve won in every sport they’ve played in since they were in 3rdand 4thgrade.  These kids have grown up winning in everything they’ve done, so it’s something that they’re very comfortable in this role.”

For their head coach however, this is something new.  Shae Vierra is in his tenth season as head coach and winning six straight games takes a little getting used to.

“It’s been great, but I think sometimes when you’re undefeated you feel a little more pressure than normal.  Sometimes you just wish you were 4-2 because now the expectation is that we’re going to win. I got a text from the superintendent’s secretary that the superintendent is going to be here Friday night.  There’s more pressure on us.  Sometimes the pressure that people coming to the games want to see you win and you don’t want to let them down.  Vince Lombardi said he didn’t quit because of the pressure of losing, he quit because of the pressure of winning and that’s how I feel sometimes.”

It’s a nice problem to have.  Santa Teresa will host unbeaten Goddard on Friday night. 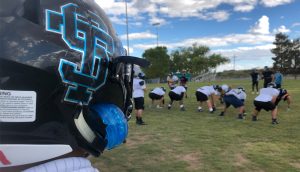 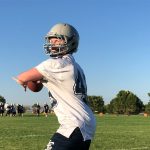 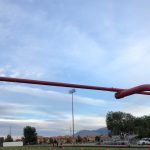