“After going on a couple visits and seeing their facilities, Stillwater feels like a place I like and can get the work in,” said Miterko.

“They’ve had consistent success over the last couple years.  Mike Gundy has done a great job.

He’s straightforward and nice.  Their vision is set.”

Miterko is considered one of the most recruited linemen in the Southwest.  He was being courted by 24 different schools including Oregon, Notre Dame and Nebraska.  With all his options, the 6’6”, 275-pound tackle says it came down to two schools, Texas Tech and Oklahoma State.

“My goal was to commit before the summer was over so I could start focusing on football and get ready for the season.”

He’s the 4thoffensive lineman to commit to Oklahoma State’s 2019 Recruiting Class. He’s rated the 91stoffensive tackle in the country.

“It’s an honor,” he said about the national ranking.  “It’s always been my goal my entire life to play college football.  I’ve been playing tackle football since I was five.  I’ve worked hard to get to the next level.  Being ranked that way, I’m proud.”

Miterko describes himself as a strong leader on his team.  “Football wise, I’m explosive. I can move quick.”

Born in Flower Mound, Texas, Miterko moved to Carlsbad before his freshman year.  He plans to study mechanical engineering in Stillwater.

“I wanted to try to go into oil and gas,” he explained.  In between workouts this summer, Miterko is spending some of his summer hours working in the oil fields to gain experience.  It looks like Oklahoma State found their own natural product to produce for the next several years.

Miterko and the Cavemen open up the 2018 season at Artesia on August 24th. 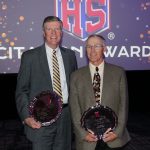