The 5-foot-7 senior midfielder scored 10 goals and passed for two assists this past season, leading the Hawks (14-6) to the Class 6A state semifinals. Martinez missed six games during the season because of her commitments to multiple U.S. Soccer women’s national teams, including a trip to China in September with the U-19 team. A three-time All-American selection by United Soccer Coaches, Martinez is rated as the nation’s No. 16 recruit in the Class of 2018 by TopDrawerSoccer.com. She concluded her prep soccer career with 38 goals and 16 assists.

Martinez has volunteered locally as a peer tutor and youth soccer coach. “Brianna Martinez is a frighteningly good and dominant player,” said Greg Rusk, head coach of Cleveland High. “She is the best player in the state.”

Martinez has maintained a weighted 4.35 GPA in the classroom. She has signed a national letter of intent to play soccer on scholarship at the University of Notre Dame beginning this fall.

EVERYBODY HAS A STORY: TANISHA BITSOI “THE GIRL FROM NASCHETTI”General News, Press Releases, Uncategorized 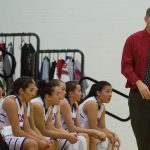 EVERYBODY HAS A STORY: MATT ABNEY “THE KID FROM A SMALL TOWN”General News, Press Releases