The 5-foot-11, 155-pound senior forward led the Tigers to an 18-3-2 record and the Class 5A state championship this past season. Foltz scored 38 goals, passed for 11 assists and netted both goals in a 2-1 win over Albuquerque Academy in the state final. The Class 5A Player of the Year and a two-time First Team All-State selection, he concluded his prep soccer career with 91 goals and 20 assists.

Foltz works 20 hours a week at an area surgery center because he plans on pursuing medicine as his profession. Also a classic car enthusiast, he has volunteered locally as a youth soccer coach and has donated his time to multiple community service initiatives through his church. “Adam was definitely at top level this season,” said Omar Hernandez, head coach of Hatch Valley High. “His strength is his power. He was not the most finessed player but kept it to basics and powered through the ball each time.”

Foltz has maintained a 3.45 GPA in the classroom and represents one of the state’s top academic candidates in meeting the Gatorade award’s broad criteria. He remains undecided upon a collegiate destination.

As a Gatorade Player of the Year, Foltz will be able to select a national or local youth sports organization to receive a grant as part of the Gatorade Play It Forward program. Every Gatorade Player of the Year state winner receives a $1,000 grant to donate and will have the opportunity to enter for an additional $10,000 spotlight grant by writing a brief essay explaining why their selected organization deserves additional support. 12 spotlight grants – one for each sport – will be announced throughout the year. 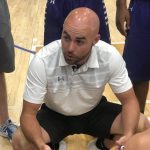