St. Michael’s senior Sean Latham is wrapping up his fourth year of varsity with the Horsemen.  The word that comes to mind when describing him is consistency.

In the field, Latham would be voted Mr. All-Around, a utility player you can stick anywhere.

“Like today, he’ll play short.  He’s played third, he’ll play a little bit at first.  I can stick him in the outfield.  I think the only thing he doesn’t do is catch.  I haven’t tried him yet but I’m sure he wouldn’t mind.”

“I never try to put myself in one category.  I like to say I play everywhere, but I like to pitch.”

Pitching is something he does pretty well too.

“I’m not going to overwhelm you with speed, but on my off-speed and my location, that’s where I’m going to get ya.”

“I try to come into every day with the same mentality to play equally or better than I did the day before.”

“He’s been awesome and honestly I wish I could have him for another couple years.”

Coach, you’ll have to settle for just a couple more weeks.  But enjoy him while you have him. 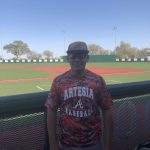