“He’s one of the top pitchers in the state and he’s sitting low 90’s right now,” is how Sandia head coach Chris Eaton describes his ace.

His name is Ricky Apodaca.  He’s a senior lefty who throws for Sandia High School…and he throws hard.

“He’s a real leader so anytime he’s on the mound he’s going to set the tone right away,” said Eaton.

Apodaca definitely has a particular style of throwing. “If it’s an up count, I like to bring the heater but sometimes I’m not afraid to drop a slider in there,” he says.

Eaton knows his pitcher very well and says the lefty can command a game with his fastball. “He’s been throwing a lot of strikes, throws hard, good off speed, but at our level he really doesn’t need to throw the off speed too much.  If you throw a low 90’s fastball that’s what you should stick with most of the time.”

This season Apodaca is being used as both a starter and a reliever, but his focus doesn’t change if they bring him into the game in inning one or seven.

“Nothing’s different, my mentality in tight times is beat up the zone and let the defense do it’s work, that’s my only job that’s my main job,” said Apodaca.

Earlier this year Apodaca took part in the MLB Dream Series baseball camp in Arizona where he performed in front of scouts from all over the country.

Eaton says that experience gave Apodaca a lot of confidence for his senior season.  “He got to go out and compete against some of the best players in the country and came away feeling like I belong and I’m good enough to hang with these guys and hopefully I can have an opportunity to play professional baseball after the season.”

The senior might hear his name called in the draft this summer.

“With the drafting, I don’t like to look into that too much.”

But if his professional options don’t work out, he already committed to play for the University of New Mexico and stay close to home.

“That was big.  I like to say I can stay close to mom, I don’t like to say that but I am.  And playing under coach Birmingham is a great coach, a great team,” explained Apodaca.

Eaton knows Apodaca has a bright future at the next level.  “The sky is the limit for him, as long as he’s in the zone throwing strikes there’s not telling what he can do.” 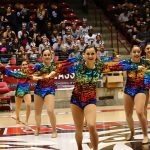 The Work Is Worth ItGeneral News, Press Releases